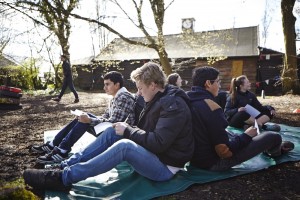 Come on and have a go!

‘To anyone who hasn’t tried Scouting before, I’d say come on up and have a go! I think that most people don’t really know that Scouting is about activities, friendship and meeting people from other countries. I’ve been in the Movement since I was a Beaver and I still love it!’

Explorer Scouts are young people, usually aged between 14 and 18 years old. They make up the fourth section of the Scouting family after Beavers, Cubs and Scouts.

Mendip ESU is our local unit in Clevedon, they meet at 1st Clevedon Scout HQ every Thursday, 7.30-9.00pm. They’re open to all; regardless of whether you are currently a Scout, or wish to join the movement. The unit is led by Mike Viney, an experienced local Scout, who can be contacted at mike_viney@hotmail.com if you’re interested in finding out more.

Explorers are the fourth section of the Scouting movement. Right from the time of Baden-Powell, there have been arrangements for young people who wanted to continue after their time in the Scout Section, and in 1967, Venture Scouts were formed from the existing Senior Scout and Rover Scout Sections.

A group of Explorer Scouts is called a Unit. They are not part of a group, instead a District. However many units maintain a good working relationship with local groups.

Not all Units meet every week, partly due to activities, holidays, exams and the other commitments that crop up in a teenager’s life, and also because Explorers tend to get out and about at weekends more often than other sections.

Explorer Scouts often get the chance to work with other Explorer Scouts in their District, not just their own Unit, so can take part in an even wider spectrum of activities.

There is also a range of ambitious badges and awards, through which Explorers can demonstrate their proficiencies and expand their interests.